RALEIGH, North Carolina — Starting next month, patrons of bars and restaurants in downtown Raleigh will be able to take their cocktails and drinks on the go while enjoying the city’s new “social neighborhood.”

What do you want to know

The borders extend the full length of Fayetteville Street and include the Red Hat Amphitheater, the City Market, as well as parts of the Warehouse District.

Businesses along Fayetteville Street now have the opportunity to be part of Raleigh’s first social neighborhood. The Raleigh City Council voted unanimously to authorize the new neighborhood and even expanded its original boundaries to include parts of the Warehouse District. The City Market and the Red Hat Amphitheater are also included within the boundaries.

“I think the hard part would be the zones and making sure people don’t go past that,” said Darvir Ahluwalia, owner of Plaza Cafe on Fayetteville Street.

Although her restaurant does not serve alcohol, Ahluwalia is in favor of the measure, hoping to gain more traffic from wandering customers for her own restaurant and see other bars in the area increase their sales.

“I think it’s a good idea,” Ahluwalia said. “I think you’ll get more people, and I don’t know how it’s going to be, because it’s kind of like an experiment, I think. But if it works out, we might start thinking about serving more, so does alcohol.

Many cities in North Carolina already have social neighborhoods in place, and others, including Charlotte, Durham and Wilmington, are considering enacting their own measures that would allow open containers on streets. All take-out alcoholic beverages will be served in specific, glass-free and easily recognizable containers. 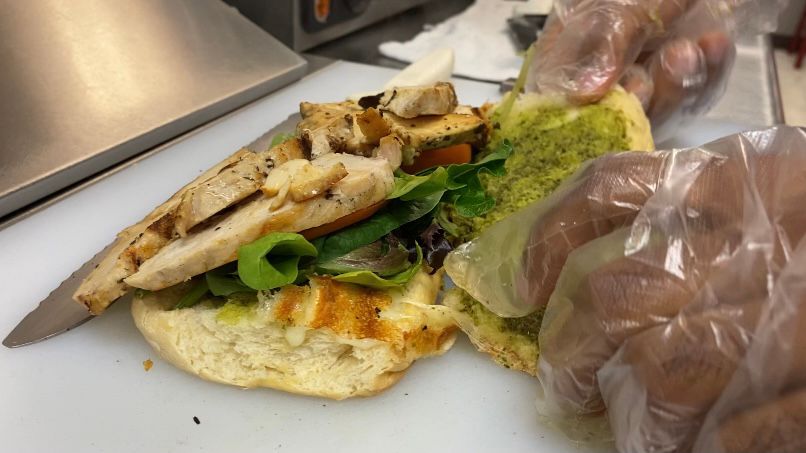 A sandwich from the Plaza Cafe, a restaurant that should benefit from the increased foot traffic in the social district. (Photo: Rachel Boyd)

“I expect next summer there will be a lot more people coming in and saying ‘let’s hang around, let’s walk’,” Ahluwalia said. “I said to someone before: it’s a bit like New Orleans. I think people will come just to try.

The new measure will come into effect on August 15 and businesses in the district will have the choice whether or not to participate. City leaders said the aim of the initiative is to encourage people to spend more time downtown, which they hope will increase sales for businesses in the area.

Due to concerns about public drunkenness and littering, the city council will reassess the measure six months after it takes effect. At the time, members said they might consider expanding the social district or including other areas if the initiative is deemed a success.

“I don’t think it will hurt my business or any of the businesses here,” Ahluwalia said. “I think that’s a good thing, and for me, it just gets more people to come in. Hey, downtown is still alive, we’re still here.”